The hall, located on the outskirts of Salzburg, once churned out tanks and materials for the war effort. Its rebirth as a market hall required two distinct aspects: embracing the industrial charm and reinterpreting market typology. The market structure begins in the middle of the hall, where the existing brick walls serve as a frame. This creates an exciting contrast between a historical structure and modern architecture.

A sophisticated space concept turns the historic industrial substance into a melting pot of producers of high-quality regional goods that are presented in such a manner that transcends shopping and creates a world of enjoyment. There are no direct paths, no counters and no specific floor plan, thus ensuring that visitors are in constant movement. Vendors and visitors experience the space, the production, shopping and enjoyment together, as a one-of-a-kind world of sensation.

The ease of appearance
What typically comes to mind when picturing a market hall are stands and vendors stacked neck and neck in packed aisles. A front, back and a middle. Not in Panzerhalle. Explaining the space concept is no easy task: it’s more of a model of staged room structure developed in all areas, levels and directions—also towards the top. Floor plans, walls and ceiling landscapes morph into one another to continuously create new impressions of rooms, niches and structures. The order seems random. But the space concept has been organized in painstaking detail as a stage for products—always with the respective user in mind, always tailored to their requirements. It is also a stage for people, where vendors and customers exchange their assigned roles and places, and thus communicate, enjoy and consume in a completely different manner.

Nothing is more difficult to plan than chaos; nothing is as unnatural as planned nature. The new market hall is centrally organized, thus keeping the walls and the old brick walls in the forefront. Individual market stands are a variation of “one and the same,” while yet retaining their individual character.

Living order
The most prevalent elements in the implemented structure are the white containers. They create not only an industrial atmosphere, but their clever layering, stacking and sequencing also create rooms of varying height and dimension. The containers, each unique in size, hang, stand and lay so that they are only fragmentarily perceptible. To additionally irritate the spatial image, mirrors and tiles have been placed between the containers on the ceiling, making the room’s true dimensions only perceptible by taking a closer look. But even then it is an image and its negative. The different container sizes, some of which have been halved and hang as mere objects from above, while others are incorporated as small shops or room partitions, dictate the rhythm of the room.

The containers form the structure, while simultaneously performing the role of buckle from room to room. But they also fulfill a very pragmatic purpose: in addition to the inexpensive construction costs, they contain the building’s mechanical and electrical equipment, like the ventilation system.

Materiality and Design
From radiant flower shops to a variety of culinary stands with premium teas, coffees, ice creams, sweets, meat and fish on offer, the market hall houses a colorful coming and going that is embodied by its design as well. The materiality, ceramics and tiles, is repeated in numerous variations and reappear depending on the goods a shop offers. Each vendor also has access to exclusive display areas, on shelves made of weathering steel or intricate wooden constructions. In the seemingly random lies order.

In addition to showcases, shelves and presentation areas, tables of varying height are also used, thus ensuring that working spaces or service areas are also individually designed. You can lean, stand or sit—but classic countertops are nowhere to be found.

Microcosm
Thanks to the fact that the owner hand selected and invited operators and vendors to participate, Panzerhalle functions as an exquisite microcosm across nearly 18,000 square meters. The offer extends beyond the market hall and can also fulfill external functions. For example, the restaurant has a connected event room, while the stylish loft above can be used for smaller, private events. Panzerhalle is multifunctional and thought through down to the smallest detail thus creating its own microcosm amidst suburban, industrial and heterogeneous surroundings, which is left behind entirely once visitors cross the threshold. 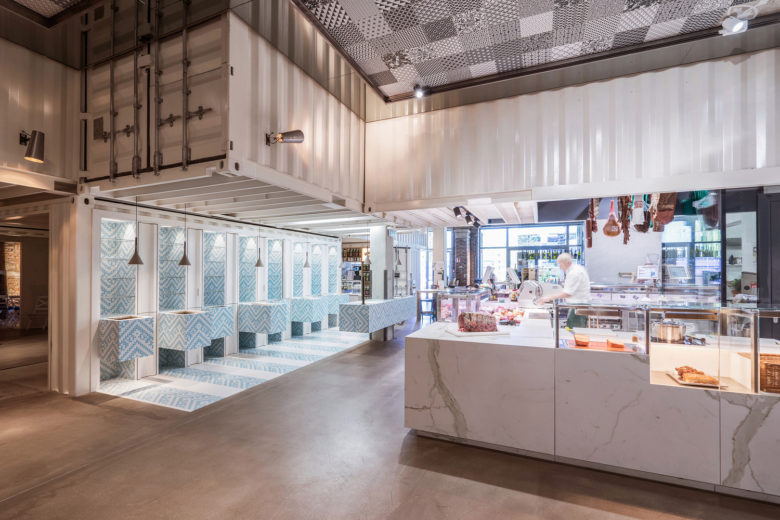 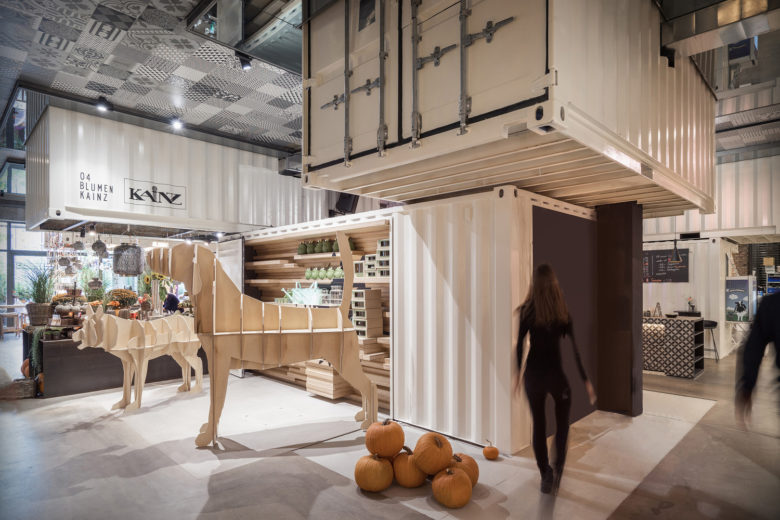 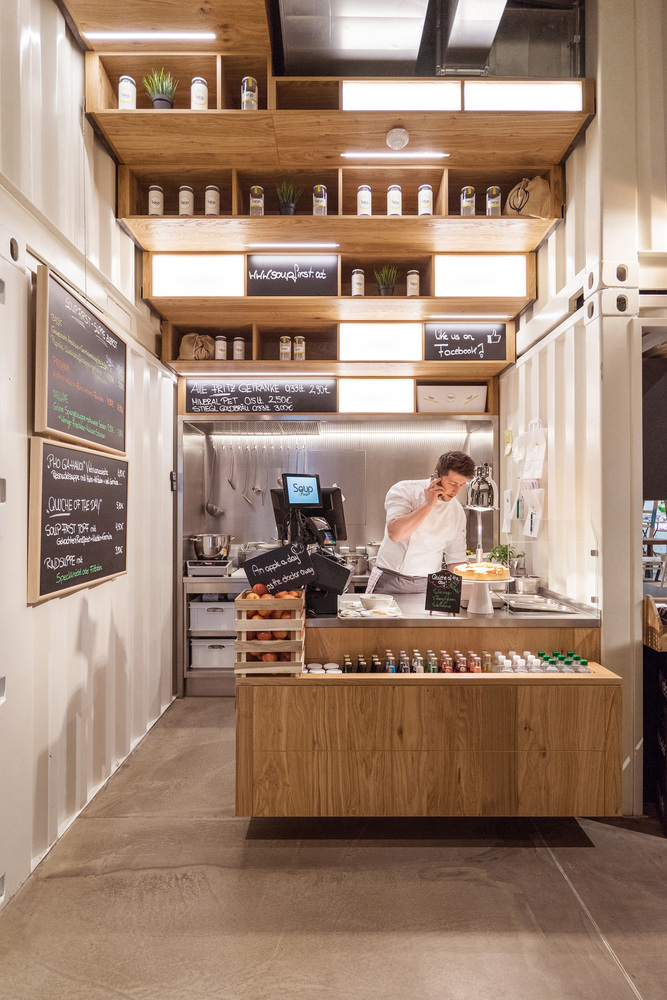 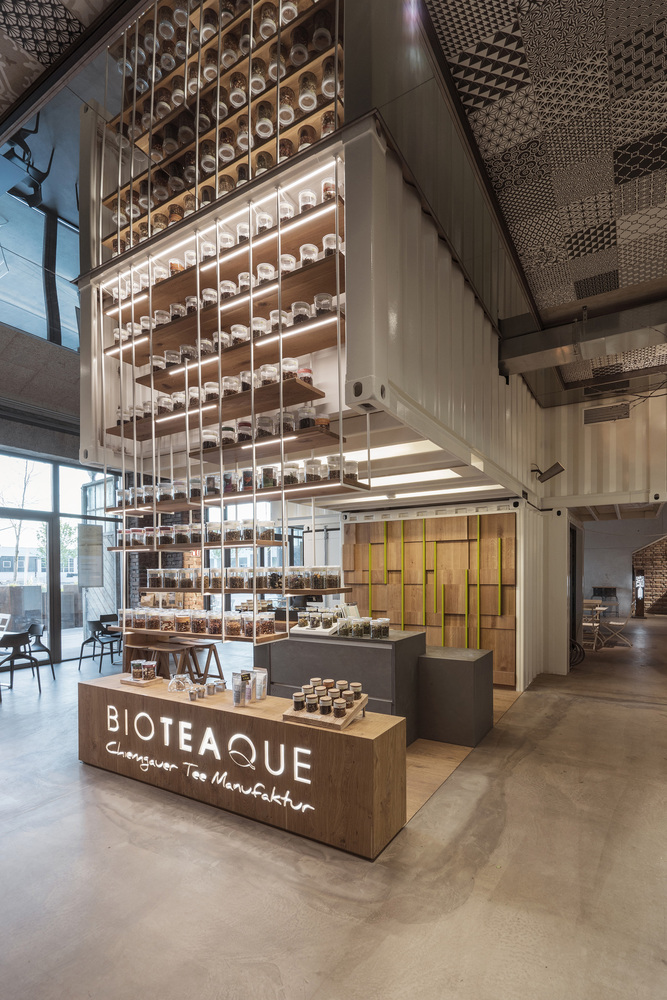 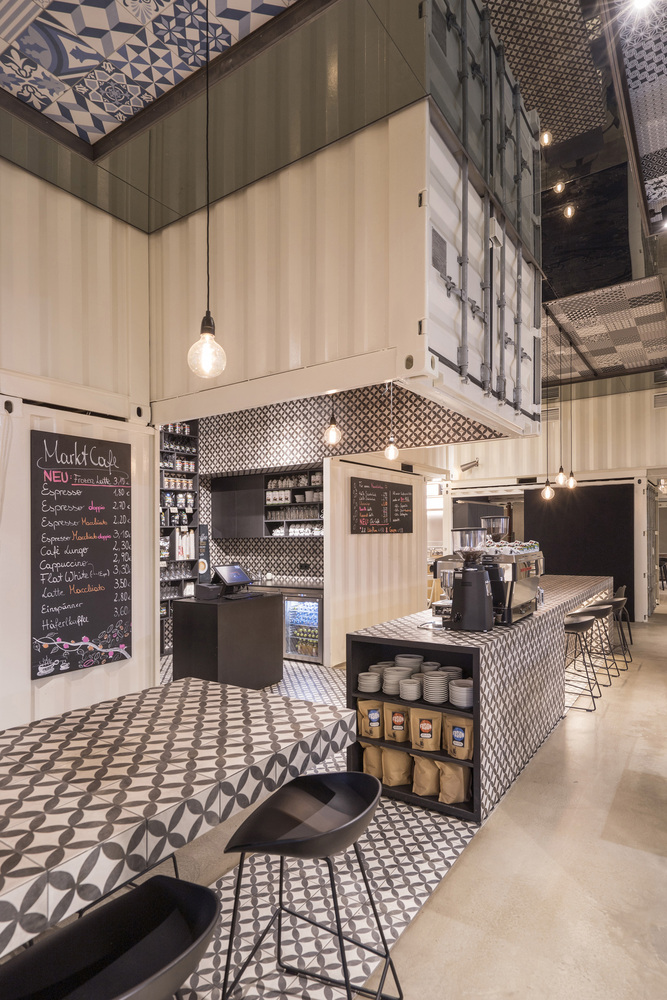 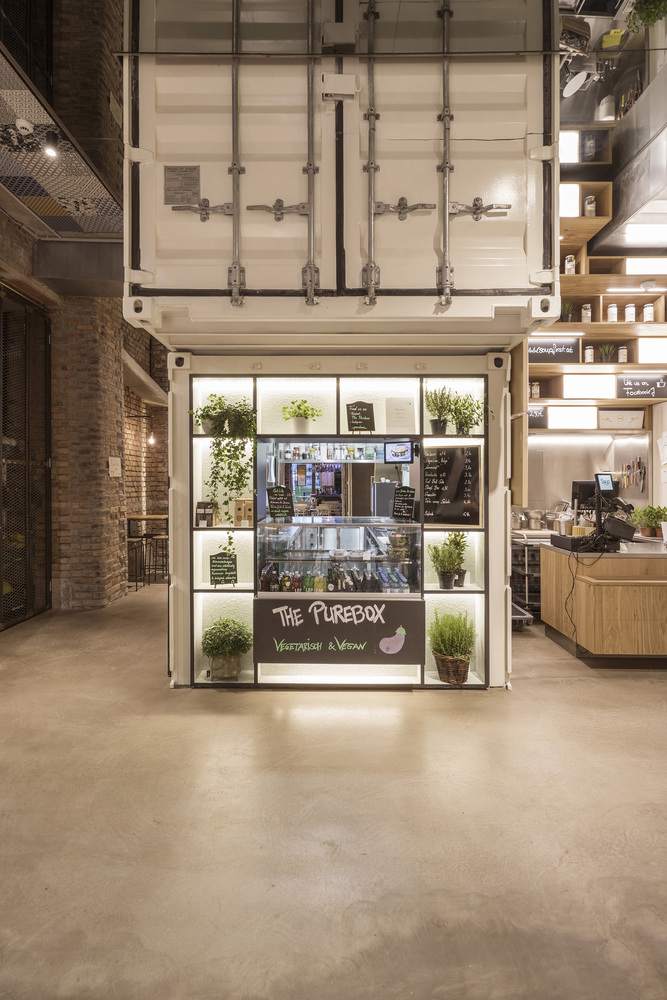 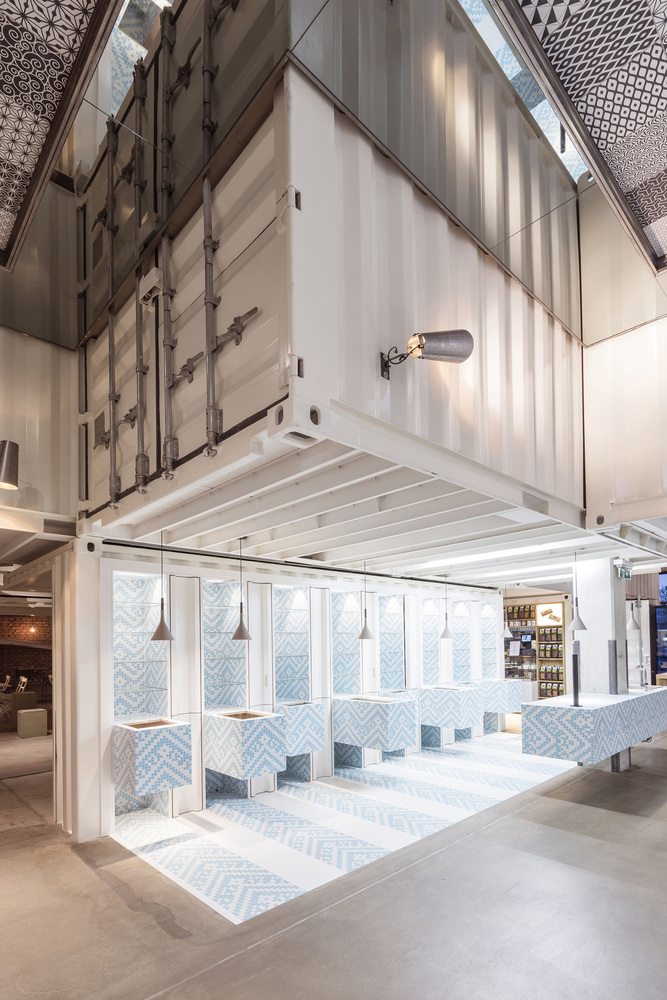 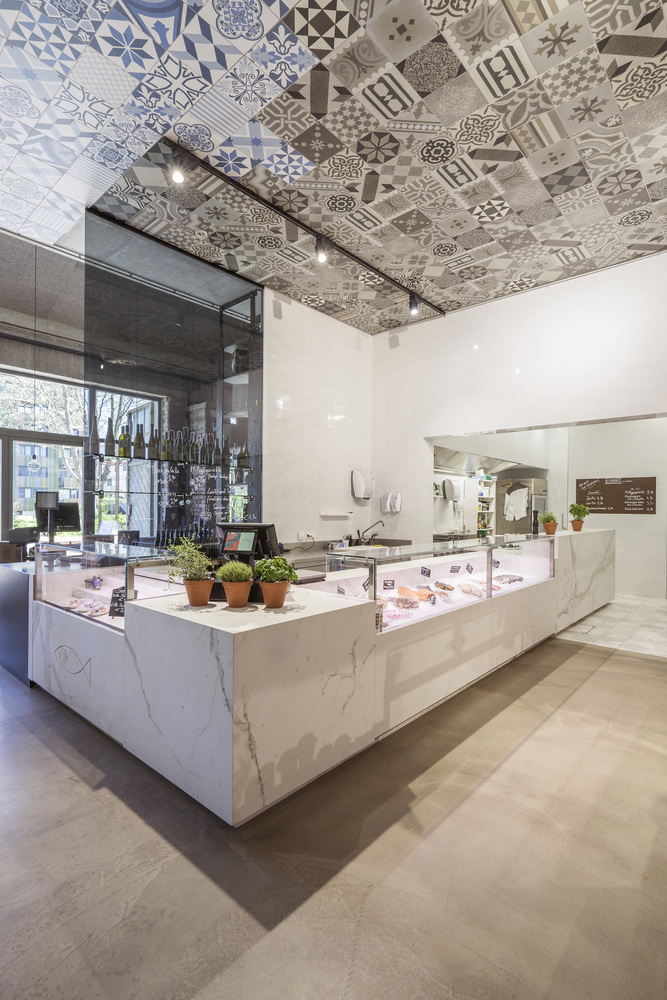 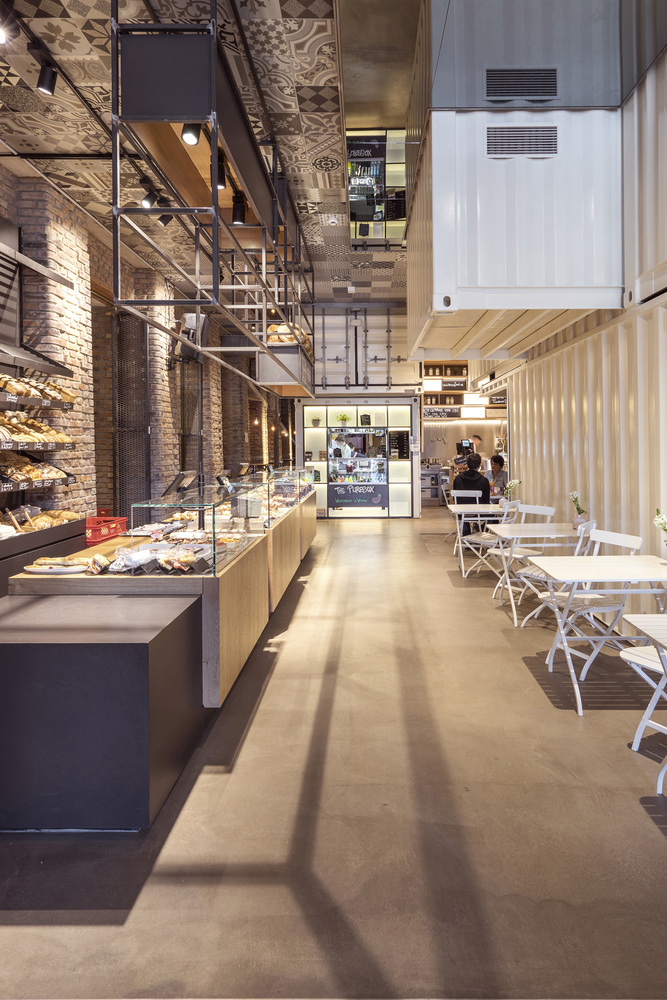 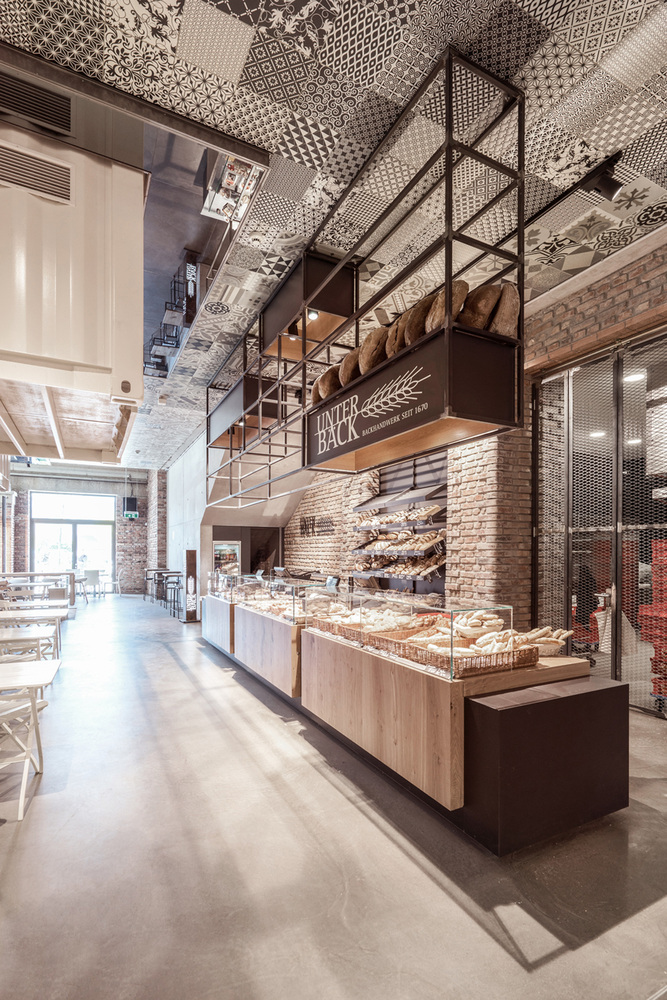 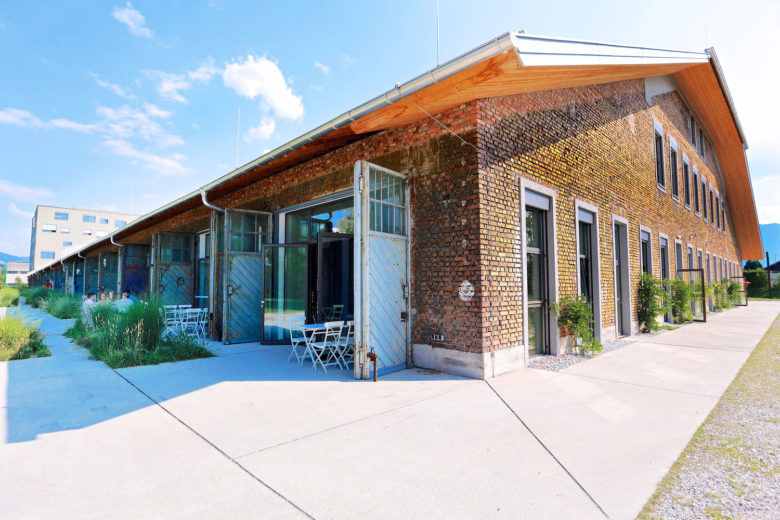