Inicio Innovación Innovación: How One Startup Built Better Health Insurance With the Magic of...

FOR 12.2 MILLION Americans, signing up for health insurance in 2017 was a leap of faith: that Obamacare would make it through the year, that the health exchanges wouldn’t collapse, that premiums wouldn’t put their families on the street. For the 54,000 New Yorkers who used those exchanges to join Oscar—a millennial-beckoning insurance startup cofounded by Jared Kushner’s younger brother, Joshua—the 2017 enrollment period wasn’t just uncertain. It was, well, kind of bleak.

In July, Oscar’s members found out the company was halving its largest network, based in New York City, from 40,000 doctors to 20,000, from 77 hospitals to 31. That kind of forced breakup should have been a very tough sell.

But somehow, Oscar convinced almost all of those 50,000-plus members to stay. The pitch they made was simple, if not exactly intuitive: Choose better care and service over a thicker phonebook of doctors. They threw in perks like concierge care teams and direct scheduling from your smartphone to sweeten the deal. And it worked. At the time, no one asked how, exactly, they were going to deliver a paradigm-smashing network—one that was smaller but also somehow better. And Oscar wouldn’t have been at liberty to say. But the answer, of course, was big data.

Yes, technically Oscar is in the insurance business. But it’s really a technology company. Its CEO, Mario Schlosser, is a Stanford-trained data scientist who has built Oscar’s core business by extracting insights from the flood of existing health care data—insurance claims and doctor directories and electronic medical records. It was a move straight out of the Silicon Valley playbook: limit choice, and deliver a better user experience instead. (See the gospel of Jobs, chapter 2010, verse D8.) Oscar’s network is not narrow. And it’s certainly not broad. It is, in the parlance of the Valley, “optimized.”

Oscar was working with the same sloppy, unstandardized data every other insurance company has. But a look inside their data science operation shows it’s what they did with it that was totally different.

When Oscar first launched in 2014, it didn’t have the time or the data to build a network from scratch. So rather than run around New York negotiating prices, it leased a network from a third-party provider. Those first two years were pretty rough: Oscar lost more than $100 million in New York alone. To get costs down, contracting director Mike Kopko and his team began meeting with hospitals and clinics to build their own network and ditch the 30 percent upcharge for renting. But Kopko and others at Oscar quickly realized that their only bargaining chip was saying no. That’s because health providers—increasingly consolidated over the past decade—hold all the power to set prices. Insurers, especially new ones, have to take whatever they can get.

The company had something else in mind: marshaling the data they had been collecting since 2014 and using it to build a smarter network—one where they didn’t contract with just any pediatric endocrinologist but the right pediatric endocrinologist. One who performed procedures Oscar’s members needed, who didn’t screw up very much, who referred to the right people and had openings for new patients.

“It seems intuitive and rational in retrospect, but it hasn’t been done before,” says Schlosser. “The novelty of the analytical framework is what sets this apart—to design a network around a patient’s journey through the health care system.”

To do that, Oscar first had to transform its richest datasets—insurance claims—into something that could tell a story about who a doctor is. Claims speak in the language of Current Procedural Terminology, or CPT codes, which uniformly describe medical, surgical, and diagnostic services. They’re built for billing, not better care. But not once Vinod Mitta got his hands on them.

Starting last summer, it was Mitta’s job to dig through records and define groups of doctors by which of the 20,000 CPT codes they used. “The goal was to better understand what type of physician everyone really is,” says Mitta, Oscar’s vice president of clinical operations. “The best way to represent that is to look at the kind of services they provide.” Orthopedic surgeons, for example, tend to carve up the body into different niches—you’ve got your knee reconstructionists and your shoulder stitchers and your hip replacers, but a jack-of-all-joints is pretty rare.

Then Mitta put his clusters in front of focus groups of physicians. Sometimes the subspecialty labels agreed with how the doctors divided up their world. Sometimes, not so much. A 90 percent overlap in CPT codes suggested that sleep doctors and ear, nose, and throat experts could be grouped together—but a tonsillectomy to take out a cancerous tumor is different than a snip to prevent snoring. Mitta took these insights and reorganized the data. Then he went back to the doctors. Then back to the data, then back to the doctors again.

The result was a novel taxonomy of health care providers: 400 buckets based on what doctors do, rather than the title on their office doors. “We boiled the ocean of health care billing into something clinically relevant,” says Nick Reber, Oscar’s vice president of network construction. Starting with doctors instead of just blind data mining, he says, made for a richer model.

Most insurance companies have a far less granular classification system. By law, they’re required to carry enough specialties in their network to meet basic standards of care. On average, that works out to somewhere around 50, though numbers vary a lot state to state and from rural to urban areas. To do that, insurers rely almost exclusively on providers’ doctor directories. But those physician lists are notoriously outdated, incomplete, and filled with errors. A 2015 JAMA study found that as many as 14 percent of health plans sold on the federal insurance exchange are missing doctors in at least one common specialty. For patients, that means the plan you sign up for often isn’t the plan you get. A doctor you thought you could see might not be taking patients, might be in a new location, or might have left the network altogether.

To make sure that didn’t happen for their members, Oscar’s next move was to combine its new classification system with patient data. Using purchased Medicare data and Oscar’s own claims data, Reber’s team built a predictive model based on how often people accessed certain services. Then they layered on information about where people lived, where doctors were located, and what services they provided. They had identified the doctors who could optimize their network.

For the most part, that’s where the hard data science ends. After verifying doctors’ specialties, locations, and availability, Kopko went out and negotiated. Throughout the fall, his team signed more than 5,000 contracts. Oscar launched its optimized network on January 1, 2017.

In some ways its members knew what they’d signed up for—fewer doctors, fewer hospitals. But Oscar never advertised exactly how it had put that network together. It didn’t know if it would work.

But five months into its grand experiment, Oscar has reason to be hopeful. In 2016, with its broad, leased network, 2 percent of premium costs went out-of-network. This year, Oscar’s out-of-network costs are down to 0.6 percent. And its share of the New York market has held strong—right around 20 percent of patients. Health care researchers say it’s too soon to call it a win: The vast majority of people on any plan, not just Oscar’s, are healthy people, and scary health episodes that require trips to specialists are rarities. So how will the network hold up over time, as fate deals Oscar’s members an unpredictable lineup of health issues?

Oscar’s network-building teams don’t pretend to know the answer. They’re data scientists, after all. But they’re also working to make sure it ages well. Every day, a tool Oscar built ingests, cleans, and updates thousands of fields with the latest information on the doctors in the network—who’s no longer seeing patients, who’s had a rash of complaints. It also incorporates member requests that fall outside of Oscar’s model, like needing a pelvic floor physical therapist. The contract-signing team gets to work filling the gaps with new providers—a process that takes about eight weeks for an individual and closer to 16 for a hospital. The result is a network that’s functionally stable even while it’s in flux. 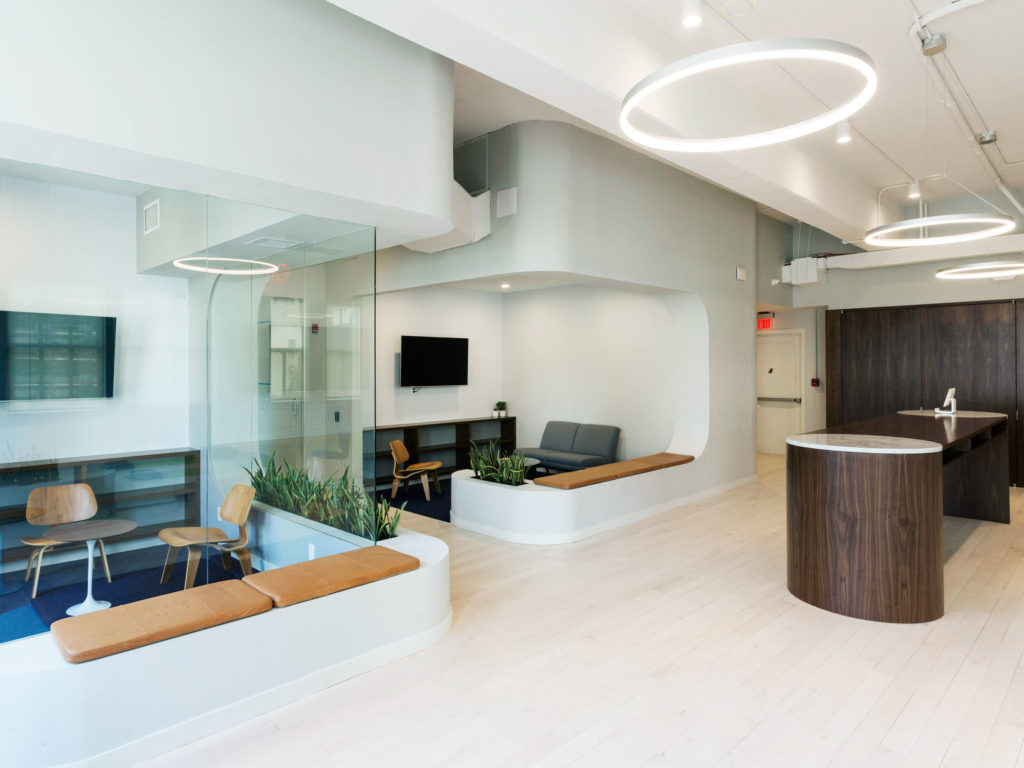 Theoretically, that should be a turn-off for members, since the research shows what matters most to patients is getting to see the doctors they want. But Oscar’s New York membership has also demonstrated its willingness to accept change. Dana DiRaimondo, a Brooklyn-based immigration lawyer, was on an Oscar individual plan for two years before switching her firm over to an Oscar employer plan this year. “They get that you might not understand all the ins and outs of health insurance,” she says. “But Oscar was so good about explaining those things, it just feels more human and personalized.”

That might be the kind of brand loyalty the company inspires, or it might be because Oscar’s membership skews slightly younger than most insurance pools. While the company wouldn’t comment on exact numbers, Backchannel reported in January that the largest chunk of its membership falls in the 26 to 35 bracket.

Both of those things are great for Oscar. But it could prove problematic for its competitors and their patients. “The argument could be made that specifically advertising one of the narrowest networks out there is disproportionately attracting healthier people,” says Simon Haeder, a political scientist at the University of West Virginia. If Oscar can survive long enough to be a success story for smaller, smarter networks, others may join the trend. Which could lead to a potentially catastrophic segregation of the marketplace. “That would create, in the worst case, the famous death spiral where healthier and healthier people drop out from large network insurers until only the sickest people are left,” says Haeder.

But Oscar’s Schlosser says that’s the exact opposite of how the optimized network would actually work. “Its virtue is its depth and precision,” he says. “That’s more, not less, attractive and useful to a patient who is not as healthy and needs to see doctors in a set of highly specialized fields.”

The Affordable Care Act did put some protections in place to keep this kind of thing from happening. Under its risk adjustment program, insurers covering more low-risk people have to transfer funds to plans with more high-risk people. Last year, Oscar had to dole out $31 million—a price the company says it’s happy to pay. But with an ACA repeal already underway, there’s a pretty good chance the program won’t be around forever. Then, it will be up to the market to decide winners and losers. If Oscar makes it that long, it will have outlived the history-making health care law that made its entrance in the insurance world possible. And it will have its data to thank.