For dividend growth investors, both The Home Depot Inc. (NYSE: HD) and Lowe’s Companies Inc. (NYSE: LOW) are great companies in the Home Improvement industry, and in many respects, they are very similar investments. Home Depot and Lowe’s are no-1 and no-2 in the US Home Improvement Stores category. In general, the home improvement industry has performed exceptionally well during the recovery following the 2008-2009 recession. Both Home Depot and Lowe’s pay current dividend yields in low single digits, though still decent and slightly higher than the current yield from S&P500. More notably, their past dividend growth rate has been very attractive in the high teens and much higher than most S&P500 companies. Still, their current dividend yields are significantly higher than their 5-year average range.

Lowe’s has a much longer history as a company compared to Home Depot. Lowe’s also has longer dividend history and paid and increased dividends for the past 54 years. Home Depot has paid dividends for 36 years but has not always increased the dividends, but has done so in the last 8 years.

Many dividend growth investors like to have both of these companies in their portfolio. However, the price at which you buy plays an important role and can impact the income yield and overall returns. This article tries to compare the two companies on their fundamentals and valuation metrics and will attempt to determine if one would be a better buy than the other at the current time.

We will compare the two companies using use various metrics like current valuation, total returns over the last few years, growth in revenue, EPS, net income, dividend, and operating cash-flow. We will also present our Dividend Safety & Growth model to compare the two companies and see which one is a better buy. We will simply let the numbers speak.

As we have done in the past with some other companies, we will compare the two companies on various metrics and maintain a simple point (scoring) system.

Home Depot Inc.: Founded in 1978, Home Depot went public on the NASDAQ and later joined the New York Stock Exchange in 1984. Today, Home Depot is the world’s largest home improvement specialty retailer with fiscal 2016 retail sales of $94.6 billion and earnings of $8.0 billion. The Home Depot has more than 2,200 retail stores in the United States, Canada, and Mexico.

Lowe’s Companies, Inc.: Founded in 1946 and based in Mooresville, N.C., Lowe’s is the second-largest home improvement retailer in the world, after Home Depot. Lowe’s is an FORTUNE-50 company and operates in the United States, Canada, and Mexico. With the fiscal year 2016 sales of $65.0 billion, Lowe’s and its related businesses operate more than 2,300 home improvement and hardware stores and employ over 290,000 people.

Even though Home Depot has a much shorter history than Lowe’s, but it grew quickly and surpassed Lowe’s by popularizing the mega-store format. In the early 80’s, for a while, Lowe’s resisted adopting the mega-store format. However, Lowe’s eventually had to adopt the big-box format in order to survive. Both companies have a well-established brand image in their markets. Both are well-managed and shareholder-friendly companies, however, Lowe’s has a 54-year long record of increasing dividends.

For this round, we will award 1.0 points to both HD and LOW.

HD had a revenue growth of 5.99% during the last five years compared to 5.32% of Lowe’s. In the most recent year, HD grew the revenue at 6.86% compared to negative 10.06% for Lowe’s. For the 5-year period, both companies had mid-single-digit revenue growth; LOW edged out HD slightly during the most recent year. So, this round ends in a tie, and we will award 1.0 points to both HD and LOW.

HD usually has a higher current dividend yield compared to Lowe’s. Both companies have increased their dividends earlier this year. HD currently yields 2.32% compared to 2.11% of Lowe’s as of 06/30/2017. The dividend growth during the last five years was 20.83% for HD and 19.40% for Lowe’s. The dividend growth for a 10-year period for HD and LOW stands at 14.73% and 18.22% respectively. Both companies have excellent dividend records, especially the rate of growth. Overall, they are nearly identical in the dividend arena; so we will award 1.5 points for each.

Here is the recent history of the two companies regarding yearly return/performance in comparison to the performance of S&P500. Both HD and LOW had phenomenal growth during the last five years. Over the long term basis, both of these companies have provided excellent returns for their shareholders. Since 1994, they have returned 14.66% and 14.92%, respectively, compared to 9.26% from S&P500.

We would compare the five-year growth of $10,000 if you invested each in HD and LOW. Obviously, there is no guarantee that the future growth will be similar. However, for the sake of comparison, it is important to know how the investment in each company would have fared. 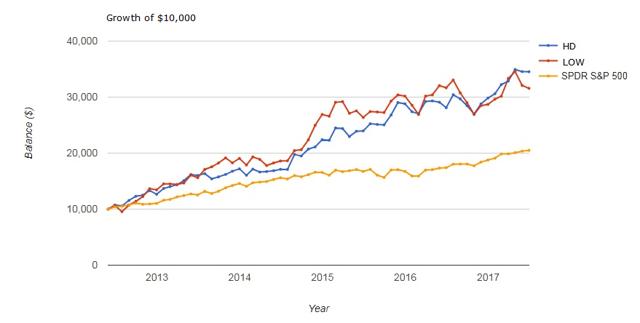 For this round, by and large, the two companies had a tie; we will award 1.5 points to both HD and LOW.

** PEG ratio based on forecasted growth rate and forecasted earnings over the next 12 months (Source:Morningstar)

Looking at the various valuation metrics, LOW has a definite edge over HD. We will award 0.75 points to HD and 1.25 to LOW.

The current yields for both companies are slightly higher than their five-year average. When it comes to dividend history, Lowe’s has 54 years of dividend history compared to 36 years for HD. Also, Lowe’s has a much longer history of yearly dividend increases, 54 years versus 8 years for HD. Dividend growth in the last five years has been exceptional for both companies. HD’s dividends grew at 20.83% and 14.73% in the past five years and ten years, whereas it was 19.40% and 18.22% % respectively for Lowe’s. Our ‘Dividend Safety Model’ resulted in quite similar scores for HD and LOW and rates them very safe with regards to dividend safety and dividend growth.

Please see our disclosures for the Dividend Safety model.

The below table shows the fair value estimates calculated based on the DCF (Discounted Cash Flow) model and so-called Buffett’s Valuation model (not designed by Buffett as such). Note that to be conservative; we are applying a 30% margin of safety on Buffett’s valuation model. We will be using a discount ratio of 8%, a projected earnings growth rate of 13.2% for HD and 16.2% for Lowe’s for the first five years (source: Morningstar) and 2% after that. For Buffett’s model, we will use projected earnings for the first five years and 0% after that, with a Treasury yield of 2.5%.

From the above models, it is clear that at current market prices, Lowe’s provides a much greater margin of safety. Lowe’s handily beats HD in this round. We will award 1.5 points to LOW for this round, and 0.75 to HD.

The above comparative analysis highlights the fact that in spite of their differences, they are very similar investments, especially in terms of investment quality. Without a doubt, Home Depot and Lowe’s, both are solid dividend-paying companies, and together they dominate the Home Improvement Retail market in North America. Both of these companies have done very well for their shareholders in the last ten years, and they are priced for a similar growth pattern as of the past few years. However, it is likely that growth will falter at some point, especially during the next recession whenever that may happen. I am afraid that the next ten years may not be as good as the previous ten years, and that’s why it is important to be conscious of the price we pay. If you are an existing shareholder, it should be a reasonably good bet to continue to hold them. However, if you are a new investor, you should proceed with caution and try to buy in three parts, with a second and third buy at lower prices with a discount of 10-20%.

We compared HD and LOW on nine different criteria, our analysis gave only a slight edge to Lowe’s, primarily because of its cheaper valuation. If we were to buy only one of them today, we would prefer Lowe’s. Of course, if you believe in diversification and don’t mind holding a large number of companies in your portfolio, it may be better to own both of them. One can own both of these companies and benefit from the diversification, reasonable current yields that are better than that of S&P500, reasonably high growth both in earnings and dividends. Below is what we would consider:

Note: Above should not be considered as buy or sell recommendations, please do your due diligence before making any such decisions.

If you liked reading this article, please click on the FOLLOW button at the top of the article.

Full Disclaimer: The information presented in this article is for information purpose only and in no way should be construed as financial advice or recommendations to buy or sell any securities. Every effort has been made to present the data/information accurately; however, the author does not claim for 100% accuracy. Further, the comparative analysis, the Rating System and the Dividend Safety model presented in this article are not based on any proven scientific techniques, and the reader should do their due diligence before making any conclusions.